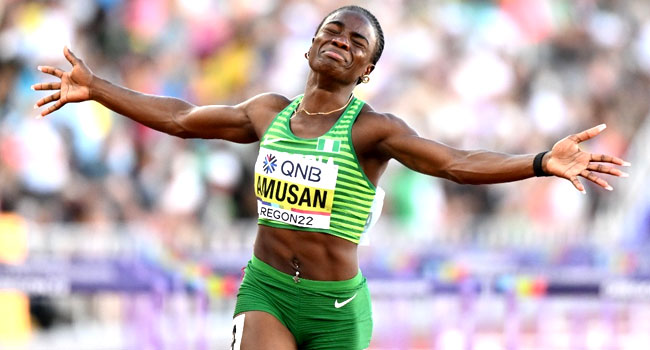 Tobi Amusan has become the first Nigerian athlete to win a World Athletics Championship gold as she blazed to victory in the women’s 100m hurdles in Eugene, Oregon.

Amusan, who had smashed the world record in the semi-final where she clocked 12.12 seconds, powered over the line at Hayward Field in an incredible 12.06 seconds.

However, her winning time will not be recognised as a world record due to an illegal tailwind of 2.5 metres per second.

Amusan had produced an astonishing world record in the semi-finals, smashing the previous best mark of 12.20 seconds held by American Kendra Harrison since 2016.

“Honestly, I believe in my abilities, but I was not expecting a world record at these championships,” Amusan said after her final victory. “The goal is always just to execute well and get the win. So, the world record is a bonus. I knew I had it in me but I could not believe it when I saw it on the screen after the semis.

“Before the final, I just tried to stay calm and to do my best. I took a deep breath knowing that I have some goal to accomplish, and it worked pretty good. I knew it was very fast but not this fast.”

Oregon 2022 is Amusan’s third appearance at the World Championships after making her debut in London in 2017 where she made the semi-finals before finishing 4th in the final in Doha in 2019. She also placed 4th at the Tokyo Olympics.

The 25-year-old has been in the form of her life in recent times breaking the African record three times in the space of 10 months and finally striking gold on the biggest of stages is the befitting way to end her wait for a world championship medal.