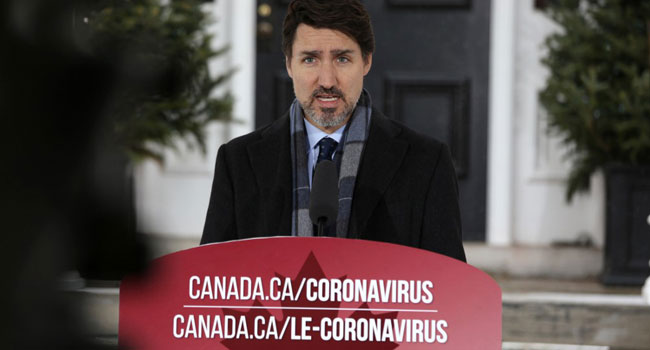 Canadian Prime Minister Justin Trudeau said Wednesday his country would prolong its suspension of passenger flights from the UK until early January in light of a new fast-spreading coronavirus strain sweeping Britain.

The North American nation is among dozens to have imposed travel restrictions as Britain, already one of the hardest hit countries in Europe, grapples with the novel strain.

“Today, I can announce that we will extend this temporary suspension of passenger flights from the UK to Canada for another two weeks until January 6, so we can prevent this new variant of Covid-19 from spreading in Canada,” Trudeau said during a press conference.

Canada had already halted the entry of commercial and passenger flights from Britain for 72 hours from midnight Sunday.

The new strain of the virus, whose discovery set off alarm bells worldwide, appears to spread more easily than other types but experts say there is no evidence it is more lethal or resistant to vaccines.

The country began vaccinating people in high-risk categories — including frontline health care workers and residents and staff of long-term care facilities — on December 14, with its relatively limited supply of the Pfizer vaccine.

Spread of the coronavirus accelerated in Canada as the holiday season approached, with the country having now recorded more than 523,000 cases and nearly 14,500 deaths since the start of the pandemic.

Mass Evacuation In Frankfurt As WWII Bomb Is Defused

ABOUT US
CHIEXCLUSIVE HUB is a brand initiative, an online hub featuring an everyday blog news tailored for you, one click away with latest entertaining and commercial headlines around the world; as well as keeping you on the know with relevant information & services like our (EShop) where shopping is made easy for everyone (buy & sell). CHI-Exclusive Hub also offers exclusive website designs for Entrepreneurs & Businesses with utmost service guaranteed. (Read more)
Contact us: matthias@chiexclusive.com
FOLLOW US
© 2021| This website is designed and managed by Udokwu Matthias (ESHOP C.O.O) | All Rights Reserved
MORE STORIES
BBNaija Gist