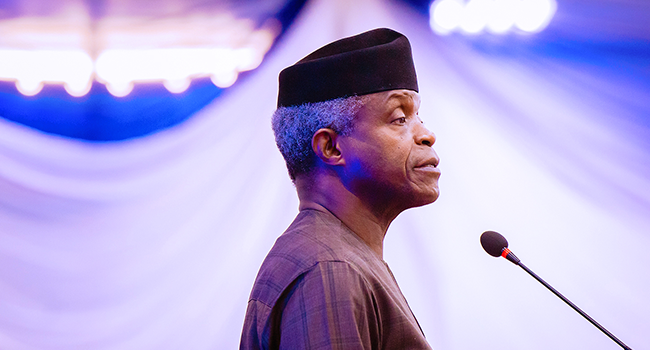 Making their marks in different fields like technology, environmental sanitation, agriculture, public health, and education, among others, young Nigerians will continue to be supported by the Federal Government to reach their full potentials, according to the Vice President, Professor Yemi Osinbajo.

Professor Osinbajo stated this on Thursday at the 2021 National Gold Award presentation ceremony of the Nigerian version of the Duke of Edinburgh International Award for Young People, held at the State House in Abuja.

The International Award for Young People, Nigeria, an affiliate of the Duke of Edinburgh’s International Award, is a non-formal educational framework that inspires young people to dream big, celebrate their achievements, and make a difference in their world.

Hailing the various ways in which young people contribute to the nation’s wellbeing, the Vice President cited the example of “young Nigerians in our armed forces leaving behind family and friends to serve our country in various internal security operations across the country”.

“We have seen how young Nigerians rallied in the wake of the COVID-19 pandemic and designed various technology solutions to support the government,” he was quoted as saying in a statement on Friday by his media aide, Laolu Akande.

“We have seen Nigerian youths break new ground and earn global acclaim in innovation, technology, sports, the arts, and entertainment. Clearly, our young people are our most valuable assets, and the Federal Government believes that they must be encouraged and supported in every way.”

Speaking about interventions aimed at supporting Nigerian youths in different sectors, Professor Osinbajo disclosed that the government would raise $500 million to support the technology and creativity ecosystem.

“Last year, Mr President launched the Nigeria Jubilee Fellows Programme, supported by the UNDP, the European Union and the private sector. It will run for five years and will give well paid work experience opportunities to 20,000 young Nigerians every year in select private sector and public sector organisations.

“The idea is that these interns will gain relevant career and life skills that will enable them to transition seamlessly into the professional, business, or public sector, while also earning good pay during the period of the internship,” the Vice President said.

Acknowledging the resourcefulness of recipients of the award, he praised the exploits of “Musab Muazu who engaged in educating out-of-school ‘almajiri’ children inspiring them to seek education and helping them to read and write.”

“Another recipient Odikpo Emmanuel, having lost one of his friends to suicide, was involved in promoting advocacy against suicide and promoting mental health awareness among young people within his community through organising workshops, symposiums, and various advocacy programmes,” Professor Osinbajo said.

“A recipient, Faithwins Iwuh for her Gold residential project, volunteered at the Renaissance hospital in Enugu State having observed that the hospital was experiencing a shortage of staff. She had to reside in the hospital for a month volunteering as a health worker and support staff to the hospital.”

In his remarks, the Chairman of the Board of Trustees of the International Award for Young People, Nigeria, Mr Olawale Ekun, praised Professor Osinbajo’s personal commitment and unwavering support for the advancement of young Nigerians.

“The late Duke of Edinburgh used to hand out the gold awards directly himself in Britain and here we are having the same recognition at the highest level,” he said.

“I think that we cannot but continue to be grateful because since this precedence has been set, for the next set of gold awardees, part of the inspiration, the motivation and encouragement that they will have, is that they too can have a day like this.”

Some of the award recipients spoke about their experiences while goodwill messages were delivered virtually by some trustees of the Duke of Edinburgh’s International Award.

The high point of the occasion was the collection of award certificates by the 42 recipients of the 2021 International Award for Young People in Nigeria.

ABOUT US
CHIEXCLUSIVE HUB is a social initiative, an online hub featuring an everyday blog news tailored for you, one click away with latest entertaining and commercial headlines around the world; as well as keeping you on the know with relevant information & services like our (ESHOP) where shopping is made easy for everyone (buy & sell). CHI-Exclusive Hub also offers exclusive website designs for Entrepreneurs & Businesses with utmost service guaranteed. (Read more)
Contact us: matthias@chiexclusive.com
FOLLOW US
© 2022| This website is designed and managed by Udokwu Matthias (eShop C.O.O) | All Rights Reserved
MORE STORIES
Africa