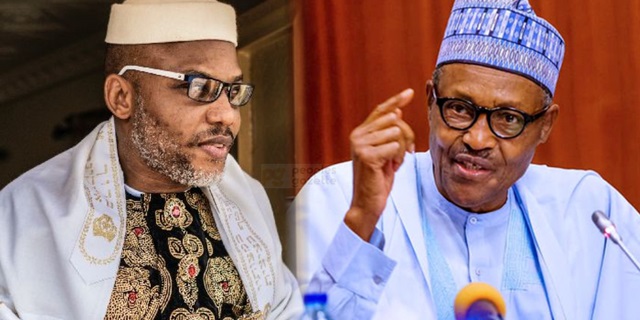 Delivering judgment on a suit filed against the federal government by Kanu, the court, presided over by the state Chief Judge, Hon. Justice Benson Anya, urged the government to desist from the use of brute force, torture and intimidation.

Anya said that those approaches were no longer tenable in conflict resolution across the globe.

The court ordered the federal government to apologise to Kanu over the violation of his fundamental human rights.

It ordered the government to pay N1 billion as compensation to him over the “brazen” invasion of his family house at Isiama Afara in Umuahia.

It described the Sept. 10, 2017 invasion by the military as arbitrary, unprofessional and a violation of Kanu’s fundamental human rights.

The News Agency of Nigeria (NAN) reports that Kanu had through his counsel, Mr Aloy Ejimakor, instituted a suit, accusing the federal government of violating his human rights.

The suit had the Attorney-General of the Federation, Abubakar Malami, the Department of State Services and Federal Government of Nigeria as respondents.

Also joined in the suit were the Chief of Army Staff, Inspector-General of Police and three others.

The suit contained eight reliefs, including an order of the court to declare his extradition from Kenya to Nigeria and his continued detention as illegal and unconstitutional.

Kanu also sought an order of the court to declare his prosecution in suit N0. FHC/ABJ/CR/383/2015, as unlawful and unconstitutional.

He urged the court to compel the respondents to pay him N5 billion as monetary compensation for damages.

He also sought an order of the court to compel the Federal Government to release him from detention and repatriate him to Britain, his country of domicile.

However, the court struck out Kanu’s six prayers, bothering on extradition and expulsion, saying it lacked the territorial jurisdiction to adjudicate on such matters.

Reacting, Kanu’s counsel, Ejimakor hailed the judgment, saying they would study it to know the next step to take.

He said: “When Kanu left Nigeria, he didn’t leave voluntarily, but what you hear out there is that Kanu jumped bail.

“Now, the court has said by implication that he didn’t jump bail. Somebody’s right was being violated in terms of threat to his life and he flew to safety.’’

According to Ejimakor, such a person cannot be said to have jumped bail.

Counsel to the Nigerian Army, Mr Amos Tori, said they would study the judgment and decide on the necessary action to take.

iPhone and iPad users: You should update your operating system right...