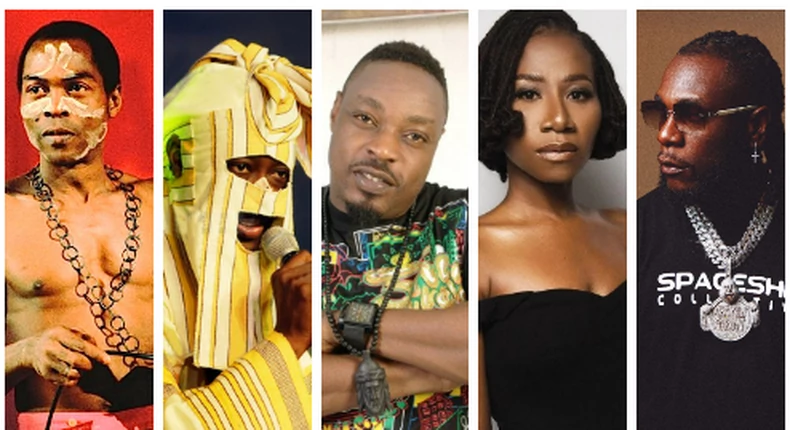 For decades, Nigerian artists have used their talents to capture the nation’s socio-cultural and political climate.

Through their songs, these artists have held the government accountable and called for good governance.

As Nigeria prepares for the 2023 presidential elections, the magnitude and significance of the situation have awakened the political consciousness of Nigerian youths. We have selected ten songs that will further inspire this social drive.

Several songs touch on the terrible state of the nation at different points and from these numbers of songs we have selected 10 timeless songs that will fuel the desire for social change.

Afrobeat pioneer and musical deity Fela Anikulapo Kuti are known for his vocal criticism of the military governments that ruled Nigerians with an iron fist.

Fela Kuti has several songs that criticize the government and also speak to the conscience of Nigerians. As Nigerians are queuing up in their numbers for their PVC, Fela’s ‘ITT’ which is a thorough indictment of the Nigerian government’s corrupt practices can help inspire a wave of anger that will sustain the current drive to change the system.

The famous rainmaker recorded ‘Police Brutality’ in 1988 as a way to draw attention to the brutality the security forces visited on Nigerians.

Decades later, #ENDSARS which is perhaps Nigeria’s biggest civilian mass movement was necessitated by police brutality. Police brutality remains a serious issue confronting Nigerian youths and Majeck Fashek’s song is a reminder of the need to get your PVC and exert the needed change.

This classic song by Afrobeats legend Lagbaja captures the myriads of challenges that have hindered Nigerians from enjoying the dividends of democracy.

The song is a reminder to Nigerians that after 61 years of independence, Nigeria is still grappling with the same challenges of corruption, tribalism, and poverty. ‘Suruu Lere’ should inspire you to get your PVC and kick out the corrupt leaders who have put the country in a sorry state.

When Eedris Abdulkareem released ‘Jaga Jaga,’ the single resonated with Nigerians and quickly became a hit. The single was so big that it was banned on radio and even drew criticism from President Olusegun Obasanjo.

18 years after ‘Jaga Jaga,’ Nigeria has suffered further decline, and the poverty rate has significantly increased. ‘Jaga jaga’ captures the state of the nation in 2004 and it does today, and this painful lack of progress should inspire you to get your PVC.

2baba made ‘4 Instance’ to decry the high level of corruption and bad governance in Nigeria. Released in 2006, this single is a reminder that nothing has changed as the politicians still treat the public purse as their private credit card.

‘4 Instance’ should inspire you to get your PVC and put an end to the generational looting of Nigeria’s collective wealth.

Asa’s ‘Jailer’ is a sober reminder of the metaphorical jail that’s Nigeria and how Nigerians are locked in a psychological, economic, social, and religious jail.

As 2023 gets closer, there’s a need for Nigerians to get their PVC and free themselves from the ideological, economic, and religious incarceration the political elite has placed them.

This song is still as fresh in memory and relevant today as it was when it was released in 2006. ‘Mr. President’ was African China’s reminder to the political class to govern rightly and ensure there’s justice, fairness, and equity in the land irrespective of status, religion, or creed.

16 years later, ‘Mr. President’ is a reminder that African China’s plea that conveyed the sentiments of Nigerians has been ignored. It should be a reminder of why you need to get your PVC and demand good governance.

This single succinctly captures the state of Nigeria and the daily economic and life-threatening hardship Nigerians are subjected to due to bad governance.

The single is a reminder that we can’t sit back and hope for the positive change we desire. Instead, you need to get your PVC and vote for the change.

2010 was hyped as the year when everything will change and Nigerians will enjoy basic amenities and good governance. Sound Sultan’s ‘2010’ was a notice that 2010 came and nothing changed.

Nigeria has kept deferring the vision of a functional society and ‘2010’ is a reminder of the pipe dream we were sold and the need to get our PVC and take our destiny into our hands.

Nigerian politicians are skilled in showing up every four years to retell the same old story of hopes and promises of $1 will equal N1 and how they will make Nigeria into an Eldorado.

Burna Boy’s ‘Another Story’ expresses how Nigerians are tired of hearing the same empty promises since 1960. So if you’re tired of this insulting regurgitation of campaign promises, it’s time to decide enough is enough and get your PVC.