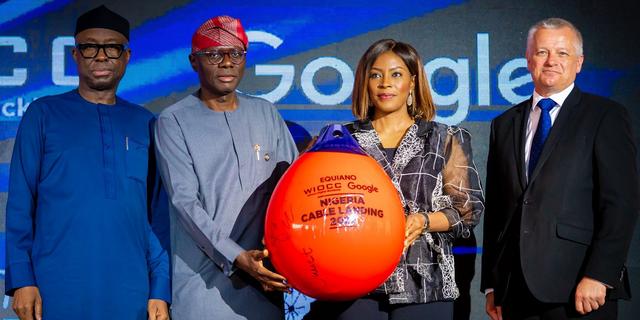 Google and the West India Ocean Cable Company (WIOCC) on Thursday announced the landing of Equiano subsea cable in Lagos.

Mrs Juliet Ehimuan Director, West Africa, Google, said at a ceremony to mark the landing of Equiano, that it would create 1.6 million jobs in three years.

She added that the subsea cable would improve the Gross Domestic Products (GDP) of Nigeria by 10.1 billion dollars by 2025.

The News Agency of Nigeria (NAN) reports that Equiano is a subsea cable named after a Nigerian born writer and abolitionist, Olaudah Equiano, sold into slavery, who later worked his way to freedom.

She said Equiano would increase internet speed by a factor of six, reduce retail prices by 21 per cent and increase penetration by six per cent.

The director said Equiano cable started in Portugal in western Europe, ran more than 12,000km along the West Coast of Africa before landing in Lagos.

She said another benefit of the cable was that it would save 2.8 million tonnes of carbon emission per annum.

“The Nigerian government has also stepped up its digital transformation programmes since 2017.

‘’These initiatives have proven crucial to the success of many industries in the country, especially the startup space.

“Google is committed to supporting Africa’s digital transformation and we are excited to see the impact of the landing of Equiano in Nigeria,” she said.

According to her, Google has worked with established partners and in-country experts to guarantee that Equiano has the greatest effect in Nigeria and throughout Africa.

She said Equiano was set to make an enduring contribution towards the development of Nigeria’s communications infrastructure.

Mr Chris Wood, Chief Executive Officer, WIOCC, said the company was proud to have been selected by Google as the landing partner for the Equiano cable in Nigeria.

Wood said the cable landed directly at the Open Access Data Centre (OADC) Lagos, from where it would be extended to other data centres across Lagos.

He said the Equiano cable would deliver improved internet quality, speed and affordability to Nigerians.

He, however, said for the benefits to be fully felt throughout Nigeria, hyperscale connectivity would be extended from the Lagos to the rest of the country.

To make this happen, he said WIOCC would deploy a comprehensive hyperscale national fibre network.

He said the network would go live in phases, starting in June and would continue through to the end of the year.

He said when combined with Equiano cable, this network would deliver transformational benefits across the country.

Wood said in March, the Equiano subsea cable made its first landing in Lomé, Togo, as a confirmation of the commitment made at the Google for Africa 2021 event to help increase internet access across Africa.

The governor of Lagos State, Mr Babajide Sanwo-Olu, congratulated Google and WIOCC for the historic event.

Sanwo-Olu said this was significant, and in his view a demonstration of the commitment of Google to Nigeria as the giant of Africa.

The governor said there was much to be excited about, at a time like this in the unfolding history of Lagos State and of Nigeria.

According to him, Lagos is seeing an unprecedented inflow of investments, from local and foreign investors that understood the business and commercial potential that the state symbolised.

‘’We say it often, that wherever Lagos goes, Nigeria and West Africa follow.

“As the government of Lagos State, we are more than ever determined to deliver on our promise to make and maintain Lagos as a safe, livable, innovative and prosperous megacity.

‘’This new cable system is the latest element in the transformation of our physical infrastructure landscape.

‘’It joins a host of new roads, bridges, jetties, factories, municipal and national rail lines, and so on, being delivered by our administration and a host of partners and stakeholders across public and private sectors,” he said.

BBNaija 2020: Prince & Kiddwaya have been evicted from the Lockdown...